Activision raises top $1.6m through the sale of a special COD pack for the Australian bushfire relief

Activision raises top $1.6m through the sale of a special COD pack for the Australian bushfire relief 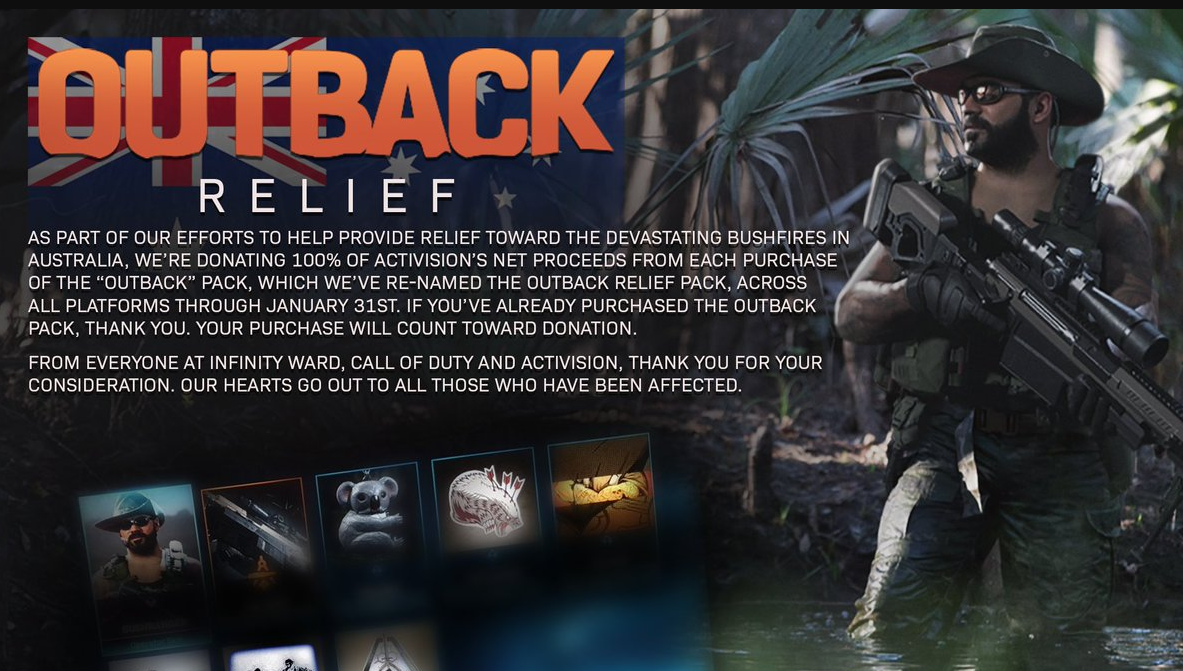 In an iniative to to help fight the Australian bushfires consequenses the games industry responds actively with donations from Activision and Wargaming, and upcoming efforts from 2K, Bethesda, Bungie, Ubisoft and PlayStation.

Activision issued an Outback Relief Pack for Call of Duty: Modern Warfare, which had raised more than $1.6 million USD in sales.

Activision acclaims all of the net proceeds from the pack will go to the humanitarian organisation Direct Relief, the funds will be used to address the ongoing problems in Australia.

According ot InGames, the leading industry-facing website for the APAC region, Wargaming has also made a substantial donation, surpassing an initial target of $10,000 on a charity livestream to reach a total of $90,000 (AUD). BlazeAid has joined efforts of Wargaming’s Asia Pacific team and World of Tanks players in the region.

The #2KBethesdaUnite campaign launched and running by branches of Bethesda and 2K Games representing Australia and New Zealand with all proceeds going to the Australian Red Cross. Donations are already open, and the Bethesda and Borderlands Twitch channels will run charity livestreams on February 15.

Sony is running a Twitch streaming campaign, which is already underway, until February 23rd. Twitch streamers can participate by hosting a charity stream on their channels anytime between now and February 23rd, allowing the audience a chance to earn major prizes.

Local Australian developers had organised an auction to raise funds for the relief efforts. Humble Bundle also sold a special 29 game bundle, with 100% of the proceeds going to related charities.